Light curves and phase diagrams of the EA type eclipsing binary BB Cephei / BB Cep.  Data was obtained from photometry of 171 images take with the Open University COAST Telescope, between 2017 July 6 and 2020 February 21, using a V filter.  All measurements were made using the same comparison stars.

The data points have been colour coded;

The light curve appears inconsistent over time.  To reduce the possibility that this was due to observational errors of some type the following diagram includes the light curve of a comparison star.  For further discussion on this see here on this website.

Assuming that the changes are due to BB Cep itself, the above results generated the following light curve, using the same colour code.  The period is that given by the AAVSO VSX for this star.

​This is an example of the O'Connell effect.  Lacking further data, including spectroscopic information, experiments with Binary Maker 3 suggest that these changes would be consistent with an area on the leading edge of the larger, cooler component decreasing in luminosity/temperature during these observations, similar to RS CVn stars.


​
There is a suggestion of a secondary minimum at phase 0.5, which is consistent with the following light curve and phase diagram (p=30.1856d) constructed from data from the Northern Sky Variability Survey (NSVS) for object ID 1457693 during the period May1999 to February 2000. 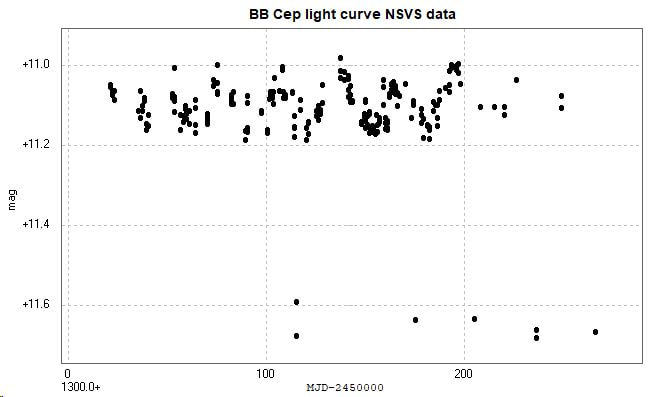 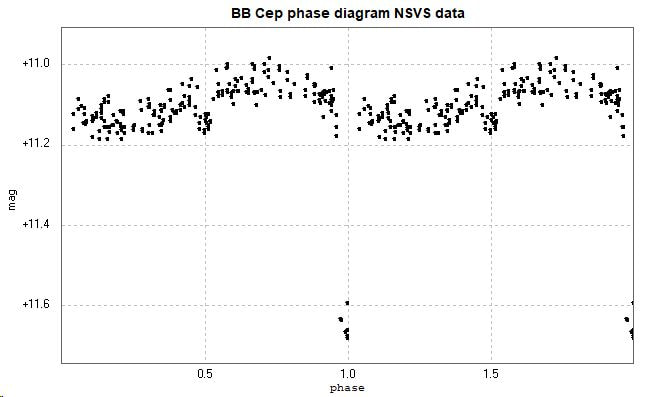 The catalogued period for this star is 30.1851d (GCVS) and 30.1856d (AAVSO VSX) (accessed 2020 March 19).  The following phase diagram was plotted using the latter period.  The 'doubling' of the curve for the maxima is a consequence of the changing magnitude at the maxima over time.  The red data points are discussed below.
[This page updated 2020 March 19.]