Light curves and phase diagrams of the EB type eclipsing binary BM Cassiopeiae / BM Cas.  All the following phase diagrams have been plotted to the catalogue value of 197.28 days for the period (GCVS, AAVSO VSX).  (Kreiner gives the period as 197.31 days).  The spectrum is given as A7Iab (GCVS) and A5Ia-F0elab (AAVSO VSX). (Accessed 2020 April 8.)

The light curves, and in particular the phase diagrams, are presented 'as is'.  See below for a discussion regarding their properties..
The following light curve and phase diagram were constructed from photometry of 116 unfiltered images taken with the Bradford Robotic Telescope Cluster Camera (BRT) between 2012 September 4 and 2016 October 3, and 255 images taken with the Open University COAST telescope between 2017 July 6 and 2020 March 17 using a V filter.

One notable feature of this phase diagram is the irregular shape of the rise from primary minimum (at phase 0 / phase 1), which differs from the smoother fall to primary minimum.  In particular, the crescent shaped segment brighter than mag 9 might suggest that the star starts 'flickering' by about 0.1 mag.  However, closer investigation - see below - appears to show that this particular behaviour is an artefact of plotting the phase diagram using 'gappy' data.
The above light curve and phase diagram are repeated below, this time with each orbit shown in a different colour, eleven in total. 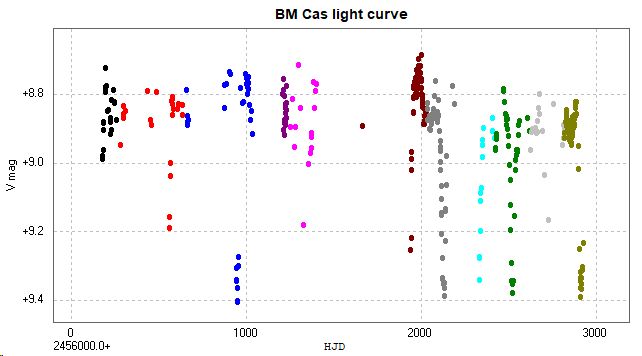 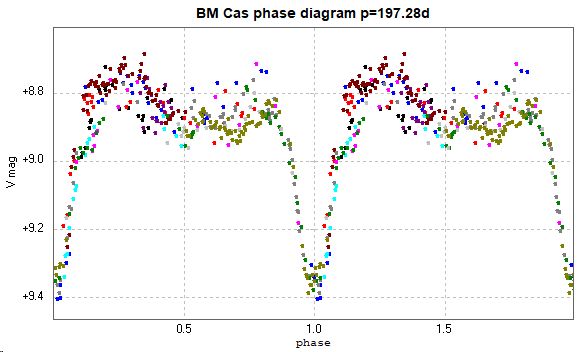 The section of the phase diagram between phase 0 and phase 0.15 is enlarged below. 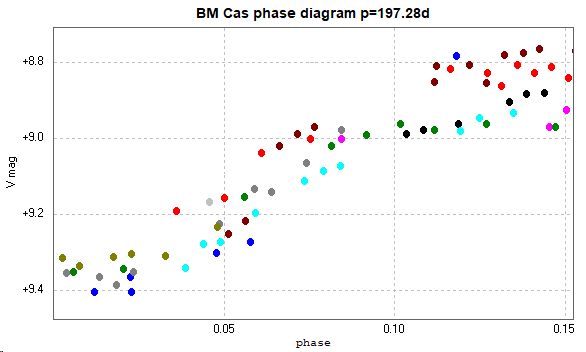 The crescent shaped section brighter than mag 9 appears as a 'hollow' near the top right of this curve, and it can be seen that the brightness for any one orbit does not 'flicker' in the manner suggested by the original phase diagram, but continues to increase in a smoother - monotonic - manner.  This is more easily seen in the phase diagram below, where the data for each orbit has been shifted by multiples of 0.2 mag so that the light curves for each orbit can be seen more clearly (note that the colours do not correspond to the colours in the above diagrams). 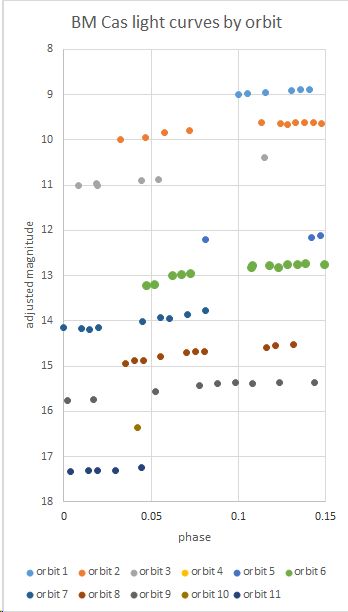 It had been suggested that this behaviour, together with the scatter seen in the light curve at maximum luminosity, might be due to one of the components being an intrinsic variable, eg a Cepheid, (Thiessen 1956).but this has subsequently been discounted.  Instead, the cause of the variations might be due to some as yet undetermined type of variations in the hotter component (Fernie 1997), or a 'hot region' located between the two components (Kalv et al 2004).
[This page updated 2020 April 8]