Primary minima of the EB type eclipsing binary HL Aurigae / HL Aur observed with the 2" Titan at Somerby Observatory, together with their calculated times of minima using Peranso ANOVA.
All the observations were made with the same equipment, but the star is so faint that the 'correctly' exposed images of 2012 gave so few data points that the light curves appear to have 'kinks' in them.  For the 2019 January observations I used much shorter exposures, generating more data points.  Although underexposed, the actual curve appears smoother due to the greater number of data points, and the calculated error in the HJD of minimum, about +- 6 seconds, is one third as large as those constructed from the longer exposures, which are about +-22 seconds.  [This topic was discussed by Chaplin, Samolyk and Screech, June 2018.]
The corresponding light curve and phase diagram of the above four minima is shown below. 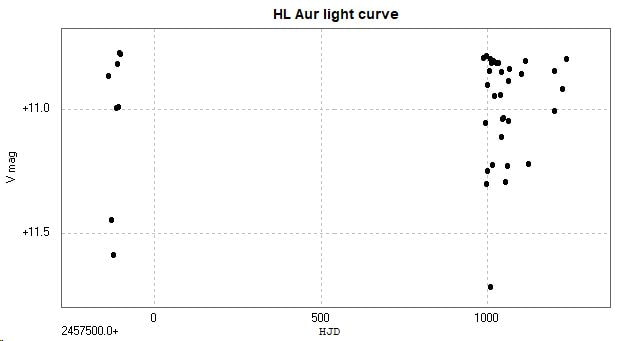 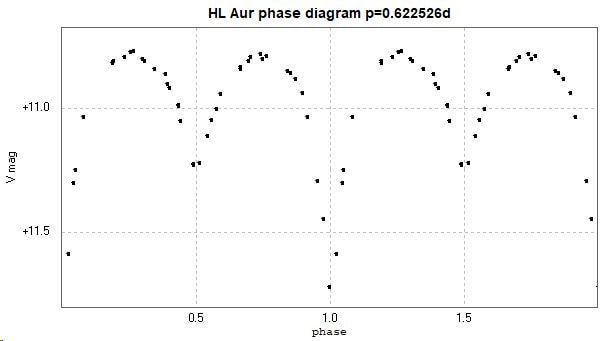 Combining the minima observed from Somerby with the data from the BRT and COAST telescope generates the following light curve and phase diagram.  The Somerby data (unfiltered and untransformed) is in black and the BRT/COAST data is in red.

The phase diagram is repeated below in monochrome.

These are a couple of primary minima I observed visually with my 10" Newtonian from Somerby Observatory.
​[ Page updated 2020 January 18 ]